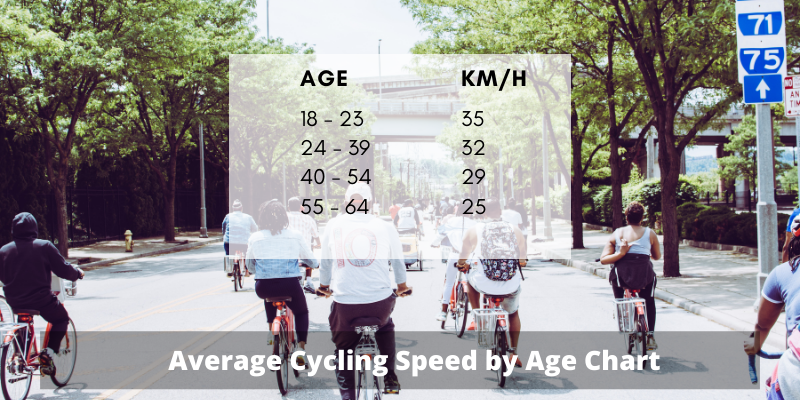 Everyone wants to be faster on their bike. But the question is, how fast can you go? This average cycling speed by age chart might provide some of the answers you need! It also shows what speeds are attainable at different ages and stages in life. So keep reading, cyclists!

What are the average cycling speeds for different ages?

It allows enough time to avoid dangerous hazards and collisions with motorized vehicles, as well as reacting to adverse surfaces such as gravel or mud. For those who enjoy off-road cycling through forests, trails, or parks – speeds of 12-16 mph (19-27 km/h) can be considered safe.

So when you compare the different age groups, it’s clear that as you get older, your average cycling speed decreases. This is because of all the reasons below:

How to calculate your own average cycling speed?

If you’re wondering how to calculate your own average cycling speed, then it’s easy – just follow these steps:

Step 1: To measure your progress while cycling, use a bicycle computer. You can track your cycling time, distance traveled, and average cycling speed.

Step 2: Record all completed rides in a training diary or calendar. That way, you can keep track of your progress and keep on course to achieve your goals.

So let’s say, for example, you did a 30-minute ride with an average cycling speed of 18mph (29km/hr) – here’s how you’d use that calculation:

This is a great average cycling speed for a 30-minute ride.

Tips on how to increase your average cycling speed:

If your average cycling speed is too slow, then you can follow these tips on how to increase your cycling speeds:

If you increase the frequency of training, it’s likely that you’ll see an improvement in your performance. So cycle more often! Also, try doing interval training which involves alternating high intensity with low-intensity efforts during a single workout session. This type of training has been shown to improve endurance by improving the lactate threshold.

Mix up the terrain:

Riding the same route or trails can become boring! Try different routes or change your regular roads for off-road paths through parks or forests. You could also join group cycling events if you want some motivation and social support for building fitness.

Read: How To Plan A Cycling Route? [4 Simple Steps]

Riding in a group can be great fun and can help to keep your motivation. Plus, when riding with others you’re more likely to cycle at a higher average cycling speed because there’s pressure from the group to not fall behind!

Change up your position:

If you’re riding in a competitive manner then it makes sense that you want everyone else to ride faster too. So move your cycling position forwards or backwards slightly so that you have a lower wind resistance when cycling at average speeds. This will mean that you’ll need to exert less effort against the wind when speeding up or slowing down.

If you’re looking for a long-term fix then improving overall fitness levels is likely to have a positive effect on your ability to cycle fast. Your aerobic capacity is an important factor that affects how efficiently our bodies use oxygen during endurance activities like cycling. So start exercising regularly and eating healthily in order to boost fitness levels.

If you want increased leg turnover when pedaling at high speeds, then consider using a compact crankset. This allows you to have a higher cadence as you cycle through the gears and it can help you to tackle climbs without slowing down.

If you’re looking for a quick fix then this is definitely something that’s going to have an effect on how fast you ride or cycle! Cyclists with more powerful legs can maintain faster speeds when climbing hills and this is due to increased leg turnover rate. So try out different types of workouts in order to improve your leg strength and force production.

Ok, I hope this helps! How’s your average cycling speed? Leave a comment below…

I’ve created this table for people who either want to increase their average cycling speed or maintain their current speeds.

If you’re a new cyclist (less than one year of cycling experience) then it’s likely that your average cycling speed is around 18-22 mph (29-35 km/h).

If you’re an experienced cyclist with over seven years of cycling experience then you should have no problem maintaining your average cycling speed of 35 mph (56 km/h). But, if you’re looking for a change in pace, try using gears 2-3 lower than normal so that your cadence is around 85 rpm.

The table below shows average cycling speeds for new and experienced cyclists. The age ranges are just a guide so don’t take them literally!

For example, a woman who weighs 120 lbs (54.5 kg) will find it more difficult to cycle at speeds over 20 mph, compared to a male rider who’s of similar weight and height (around 165 lbs or 75kg). So although female cyclists do make up a significant proportion of the sport, they’re typically slower than their male counterparts due to physiological reasons.

The average cycling speed for men is around 19-22 mph (31-35 km/h). This can vary depending on the person’s level of fitness, age, and cycling experience.

For example, new cyclists tend to ride slower than seasoned cyclists who’ll usually cycle around 22-25 mph (35-40 km/h). And after years of regular training, some male riders can easily maintain speeds above 30 mph (48 km/h) without showing signs of fatigue!

Of course, there are always exceptions to the rule… Some top male riders can cycle at speeds over 40 mph (64.4 km/h) which is an amazing achievement if you consider that they’re riding uphill.

So although it is easier to find female cyclers in the 25-30 mph (40-48 km/h) range, it’s still possible for men to ride at much higher speeds.

It should be noted that most cycling speed tests are done on flat terrain with a slight or no headwind. If you’re always riding into a strong wind then this will have a significant effect on your average cycling speed and improve times over longer distances such as half marathons and full marathons.

The average cycling speed for kids is typically between 10-15 mph (16 – 24 km/h), depending on their age. Younger children are often not physically developed enough to cycle fast but there are exceptions to this rule!

What is a good average speed for a beginner cyclist?

At this average speed, you should be able to cycle around 8 miles before needing rest and it shouldn’t be too difficult to maintain your cycling speed when climbing hills.

Read: How To Ride A Bicycle For The First Time (A Complete Guide)

If you watch road cyclists riding at high speeds then watch the way they change their legs – it’s very smooth and controlled and this indicates that these riders have strong leg muscles so congratulations on achieving such a fast cycling speed!

To get started, take things at your own pace and remember to build up physical fitness over time. To learn how to cycle faster, try out different types of workouts in order to improve your leg strength and force production.

But, if you want to change your average cycling speed as quickly as possible, try using a compact crankset and higher cadence so that you can cycle at speeds of over 20 mph.

Is cycling good for 70 years old?

If you are 70 years old, I’m not sure how good it is to cycle at 20 mph with this age. At the age of 70, your heart does not pump as much blood to your muscles. While cycling with a good average speed of 20 mph, you would have less cardiovascular output because the muscles need more energy due to less cardiac output.

You can still cycle at normal speeds but most likely will tire easily after 10-20 minutes. Try cycling with shorter distances and slower speeds so that you can exercise for longer periods of time without tiring so quickly!

Is 18mph a good cycling speed?

An average 18 mph cycling speed is good for a beginner and if you find this pace easy enough, then try increasing your average cycling speed to 22 mph (35 km/h) after one year of regular training.

If you can cycle at 25 mph (40 km/h), consider yourself as a fast recreational cyclist and if not, keep training hard until you can!

You can easily maintain this speed when climbing hills unless you stand up on the pedals to give yourself a boost. Why not try doing some hill sprints regularly so that you can maximize power output?

The average cycling speed by age chart shows the speeds attained by cyclists at different ages. These averages are based on power meter data from Strava athletes.

The figures show the average cycling speed of cyclists by age and gender. If you’re not satisfied with your current level, there’s no time like the present to start improving!

So if you want to know how fast you can go while riding a bike, it might pay off for you to check out this information about what speeds are attainable at different ages and stages in life. You’ll be able to see where your skills stand against other people who ride bikes…and soon enough maybe even surpass them!

How To Do Cycling To Increase Height?
How To Make Cycling More Comfortable?
Bicycle Helmet Size Chart: Know Your Size And Fit
How To Dress For Cycling?

My journey with cycling started in 2011 and I have been cycling since then. I am a self-taught bicycle enthusiast who has collected a lot of knowledge about it through the years. On this blog, I share my passion and experiences with cycling, as well as insights and recommendations. This blog is also useful for any riders out there who want to improve their cycling skills and techniques.

Haro is a well-known brand in the cycling world, but is it a good one? In this Haro bike review, we'll take a look at some of the pros and cons of this popular brand. We'll also discuss why Haro...

Continue Reading
link to Can You Add Gears To A Bicycle?

Gears are a great way to make your bicycle easier or harder to pedal, depending on the terrain. Can you add gears to a bicycle? Yes! You can easily change out your old rear wheel for one that has...

My journey with cycling started in 2011 and I have been cycling since then. I am a self-taught bicycle enthusiast who has collected a lot of knowledge about it through the years. On this blog, I share my passion and experiences with cycling, as well as insights and recommendations.

This blog is also useful for any riders out there who want to improve their cycling skills and techniques.

CyclingAdvise is a participant in the Amazon Services LLC Associates Program, an affiliate advertising program designed to provide a means for sites to earn advertising fees by advertising and linking to Amazon.com. We are compensated for referring traffic and business to Amazon and other companies linked to on this site.