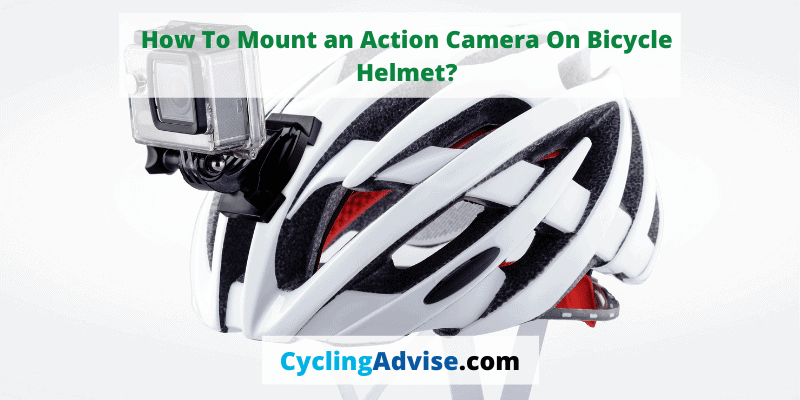 Video shooting while riding a cycle is fun but difficult as well. You can’t hold a camera or phone and shoot a video while you are riding your cycle. It is not only risky but the video quality deteriorates too. The footage includes more jerks and you won’t get a stable or steady video.

To solve this issue and get top-notch videos, mounting an action camera on your helmet is the only way out. It keeps the camera steady over your helmet, the footage captured is clear, and the risk is zero as you don’t hold the camera in your hand while riding.

But how to mount an action camera on the bicycle helmet? Let me explain this to you in the latter part of the article:

3 Steps To Mount An Action Camera On Bicycle Helmet:

You have to place the mount at the middle or center of the upper shell of the helmet. The mount has to be in the middle so that you get balanced and complete footage.

After you place the mount just at the midpoint of the helmet, you now have to find some vents through which you would pass the straps of the mount. Holding the mount in the center, insert the straps into the vents on two sides and bring them back to the center near the mount again.

The straps should tightly wrap around the vents. Don’t make it loose. Otherwise, the mount would not fix firmly.

Once you take back the straps in the middle, you have to open the clips that are there on both sides of the mount.

As you do so, now pull the straps up once again to check that it is tight enough. Now as you are holding the straps securely, use your both thumbs to click off the clip and lock them at the same time.

How To Adjust Bicycle Helmet Straps?

Now you can see the mounting system fastened over the helmet. You can see a screw in the middle. Now put your camera on the mount and tighten the screws so that the camera sits well on the system.

Decide the angle and direction of your camera and work accordingly to set up the camera. And you are done with mounting the action camera on a bicycle helmet!

3 Ways To Mount An Action Camera On Bicycle Helmet:

You can mount an action in three different ways. Each way is unique and you can select the one that makes you comfortable and improves your riding convenience. You can apply any of the three techniques on your bicycle helmet depending on which helmet you use.

Here are the three ways of mounting an action camera on a bicycle helmet:

If you want to make a video that matches your eye level, a chin helmet mount would be the best. These videos look more real and impactful as it feels that your eyes have captured the video. It happens because of the angle and position of the camera.

Most chin mounting systems have straps that you need to attach to the helmet. The straps would firmly sit on your helmet and the camera would be placed near the chin buckle. Where the camera sits, it has four joints with a screw in the middle. The action camera is fixed on the screw and you can then rotate the joints to decide the position and fix the camera.

These mounts also come with an extended mount so that you can stretch them and take selfies.

All in all, these mounts are for positioning on your chin area. You can click photos or shoot videos with action cameras like GoPro and get realistic, stabilized (depending on the camera), and an amazing angle of footage that would be enjoyable to watch. However, these are mostly for motorcycle helmets and may not be the best option for bicycle helmets.

The common bicycle mounting is the mounting that goes over the helmet. The straps go in between the holes of the helmet and sit in the middle of the helmet. It would capture 360-degree footage and keep it at any angle you want.

The action camera is mounted the same way as the previous one. You need to set the camera on a joint over a screw, fix it well, and start the camera. This is definitely the best way of mounting as you get full coverage as well as a clear and broad vision of the road.

For high-speed and long rides, this camera is suitable as you need not think of the camera fixed over the helmet and it won’t interrupt your ride.

The mounting system is the same as the other mounts. You have to fix the camera on a screw which is there due to the joints. The camera sits on the screw and is supported by the joints so that the camera doesn’t move or fall off.

The skiing helmet doesn’t feature any straps as the mount completely relies on the adhesive attachment.

You can use any of the systems mentioned above. However, the best option is to go for the bicycle helmet mounting where the camera goes over the helmet.

What Is The Best Place On Bicycle Helmets To Mount An Action Camera?

On a bicycle helmet, you can either fix the camera at one side of the helmet or over the helmet on the upper shell. But which one is better?

It is best to mount an action camera over the helmet at the top. Here are the reasons:

Why Do We Need To Mount An Action Camera On Bicycle Helmet?

Many may like to know the necessity of mounting an action camera on the bicycle helmet. Why do we do so?

Here are some reasons that you must keep in mind to understand why mounting an action camera is preferable:

How To Use A Skiing Mounting System?

Though it is not a usual way to mount an action camera, people often prefer using a skiing mounting system due to its portability and usability.

A skiing mount system is simple to use. The mounting device has a strong adhesive. This adhesive part has to be on the helmet. You have to attach the adhesive mount to one side of the helmet. It is super easy as the adhesive would instantly attach to the helmet body.

After you position the mount to one side of the helmet, now you need to unleash the buckles. Then you can slide open the adhesive mount that has the screw to attach the camera.

As you see the platform sticking out of the adhesive mount, place the camera, tighten the screw, and fix the camera there. And you are done!

This is an alternative who doesn’t want to do the trouble of fastening straps. It is easy and simple to use adhesive mounts. However, you can’t get the center view with this type of mount as it would be placed at the side of the helmet.

Is It Illegal To Mount An Action Camera On The Helmet?

Many people ask if it is illegal to mount an action camera on the helmet or not. This is a valid question as you are adding an extra device to your helmet, which saves your head from injuries. For such reasons, many people get fined for the traffic too. But what does the law say?

There is no prohibition to mount an action camera on your helmet unless you destroy the structure or safety measures of the helmet.

If you make a hole in the helmet or don’t fasten the helmet straps properly to mount an action camera, only then it is illegal as you have destroyed the safety parameters of the helmet.

However, if you mount an action camera in an accurate and correct way without distorting the helmet, you have the right to do so. And if anyone asks for fines, you should fight back with this point that you haven’t breached the safety parameters.

Now that you have learned how to mount an action camera on a bicycle helmet, which mounting system are you going to get? Remember to buy a system that is compatible with your helmet and makes shooting and clicking easy for you.

Decide today and get ready to capture the essence of cycling and the extraordinary views that you enjoy while cycling.

You may also want to read:

My journey with cycling started in 2011 and I have been cycling since then. I am a self-taught bicycle enthusiast who has collected a lot of knowledge about it through the years. On this blog, I share my passion and experiences with cycling, as well as insights and recommendations. This blog is also useful for any riders out there who want to improve their cycling skills and techniques.

Haro is a well-known brand in the cycling world, but is it a good one? In this Haro bike review, we'll take a look at some of the pros and cons of this popular brand. We'll also discuss why Haro...

Continue Reading
link to Can You Add Gears To A Bicycle?

Gears are a great way to make your bicycle easier or harder to pedal, depending on the terrain. Can you add gears to a bicycle? Yes! You can easily change out your old rear wheel for one that has...

My journey with cycling started in 2011 and I have been cycling since then. I am a self-taught bicycle enthusiast who has collected a lot of knowledge about it through the years. On this blog, I share my passion and experiences with cycling, as well as insights and recommendations.

This blog is also useful for any riders out there who want to improve their cycling skills and techniques.

CyclingAdvise is a participant in the Amazon Services LLC Associates Program, an affiliate advertising program designed to provide a means for sites to earn advertising fees by advertising and linking to Amazon.com. We are compensated for referring traffic and business to Amazon and other companies linked to on this site.